The Women+Water Lecture Series empowers women to share their experiences working in water and has grown substantially since 2018, engaging with an international audience and initiating dialogue that leads to change.

It is well known that women are underrepresented in science, technology, engineering, and math (STEM) professions, which encompass many facets of water research. One of the key factors that perpetuate the gendered gaps in STEM is the lack of role models and examples of women scientists to inspire their interest in these fields. 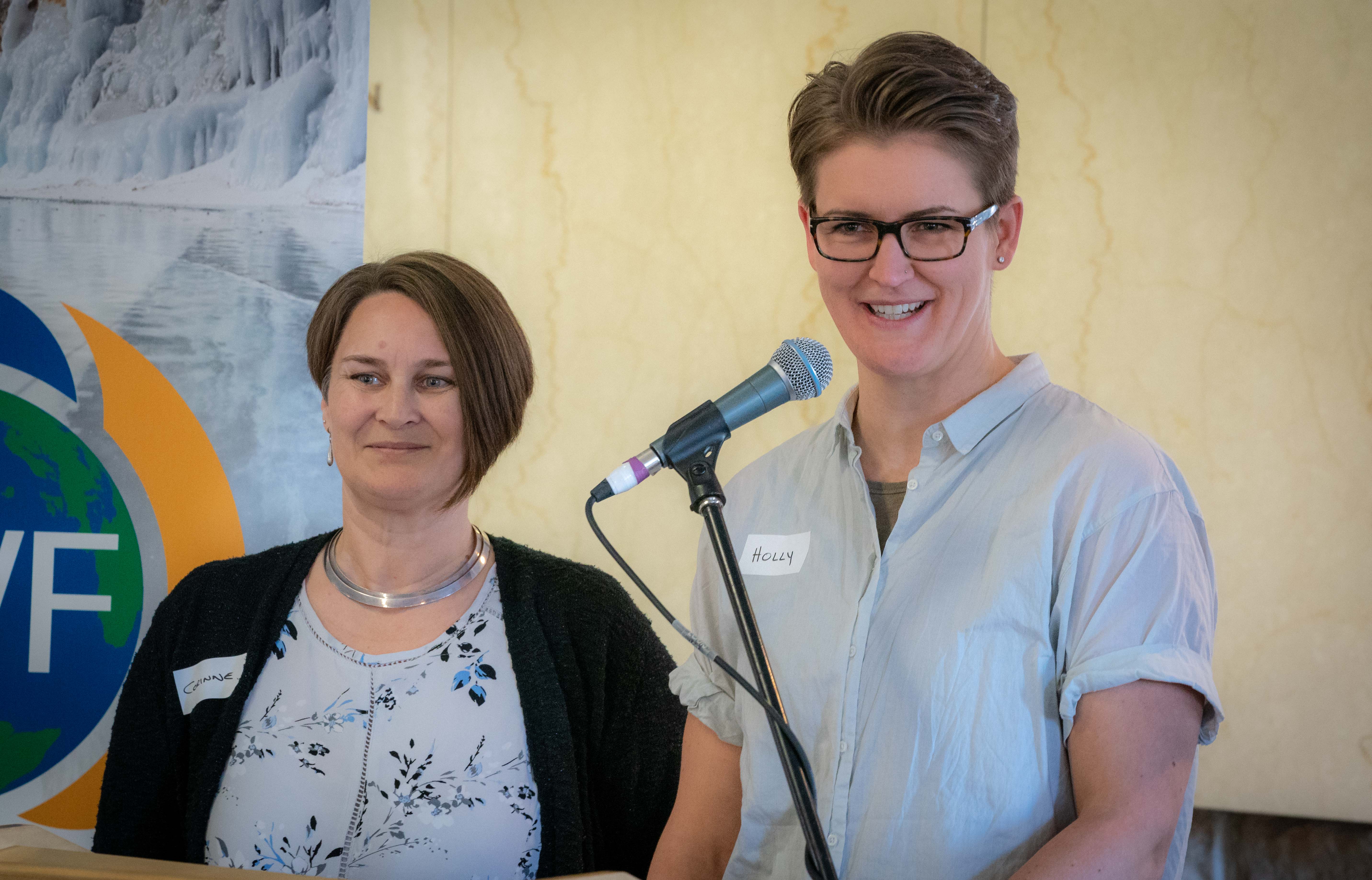 To recognize the importance of mentorship, Dr. Corinne Schuster-Wallace, Associate Professor at the University of Saskatchewan (USask) and Associate Director of the Global Water Futures (GWF) program, launched the Women+Water Lecture series in late 2018.  The series emerged from a GWF lecture on women and water that Schuster-Wallace organized with USask Professors Lalita Bharadwaj and Lori Bradford to coincide with the newly announced Government of Canada Gender Equality Week in September 2018. The lecture focused on Women in Water: A Goal of Roles, Responsibilities, and Opportunities, with an international and Canadian perspective.  Invited guest, Erin Poochay from Yellow Quill First Nation, shared her experiences and history with water in her community where women typically lead Traditional water practices.

Watch Women in Water: A Goal of Roles, Responsibilities, and Opportunities

The lecture highlighted the need for a space where women’s voices in water research and water issues could be heard. The overwhelmingly positive response, particularly from young women professionals, led to the creation of the Women+Water lecture series with the help of Holly Annand, then chair of the GWF Young Professionals. The lecture series was launched with a networking event in December 2018 and the inaugural lecture in January 2019. The foundational concepts for the Women+Water lecture series included creating awareness of the gendered dimensions of water and providing a place for women to share their water research and sector career experiences and learn from one another. It would also provide opportunities for young women professionals to build their CV’s through invited presentations.

Since then, the series has grown substantially from relatively small events held on the USask campus with some attendance to the online broadcast in 2018 to large, virtual events that have engaged with over a thousand people internationally in 26 countries in 2020 and 2021. The topics covered have been broad and include themes such as valuing water, climate change, women in the field, and more. 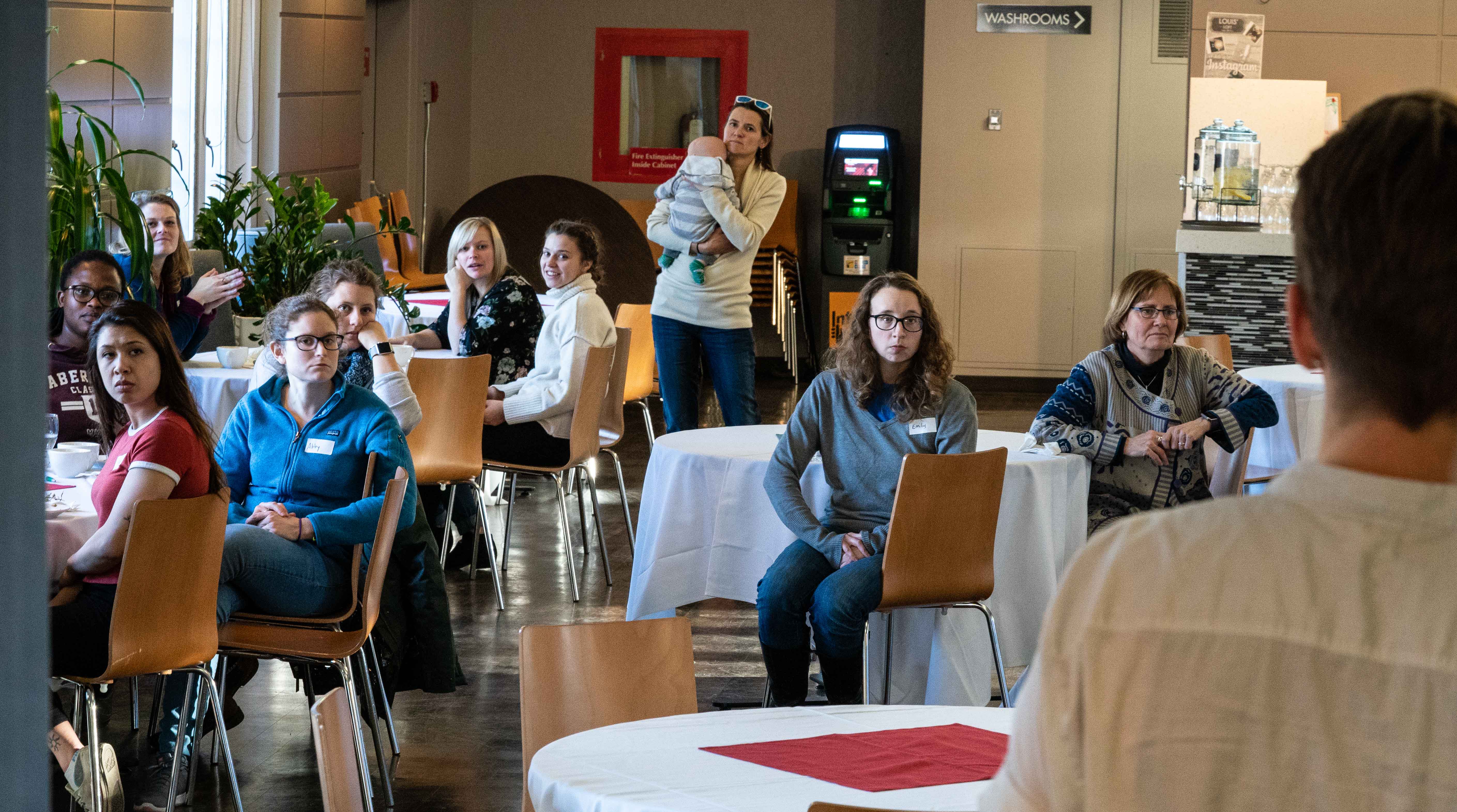 The launch and networking event for the Women+Water Lecture Series was held in December 2018 at the University of Saskatchewan.

The Women+Water lecture series attracted a diverse and engaged audience in the inaugural year, helping propel the series to expand in subsequent years. 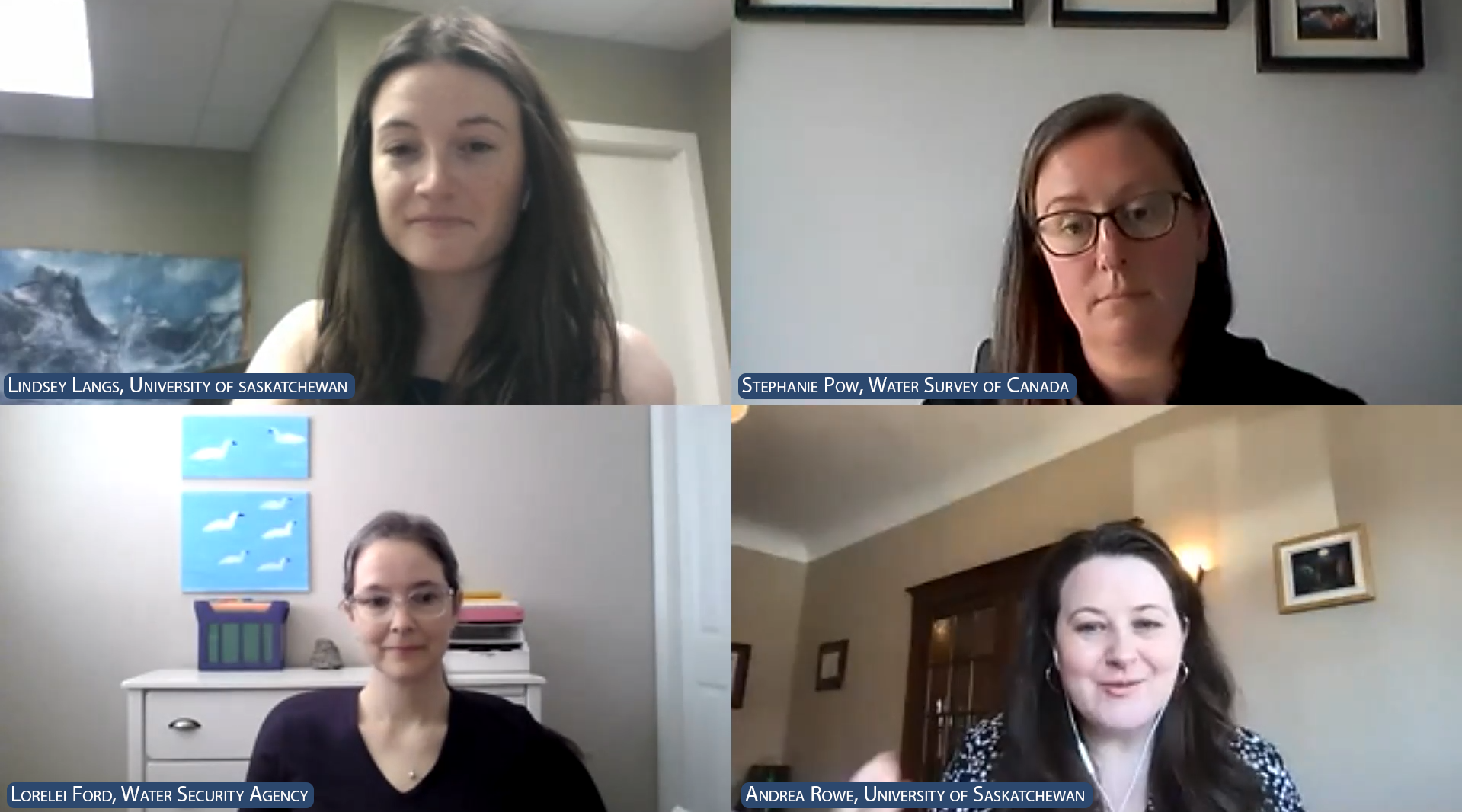 The Women+Water lecture series moved online in 2021 due to the COVID-19 pandemic and opened up the opportunity to engage with an international audience (April 8, 2021).

From Women+Water to Women in Water 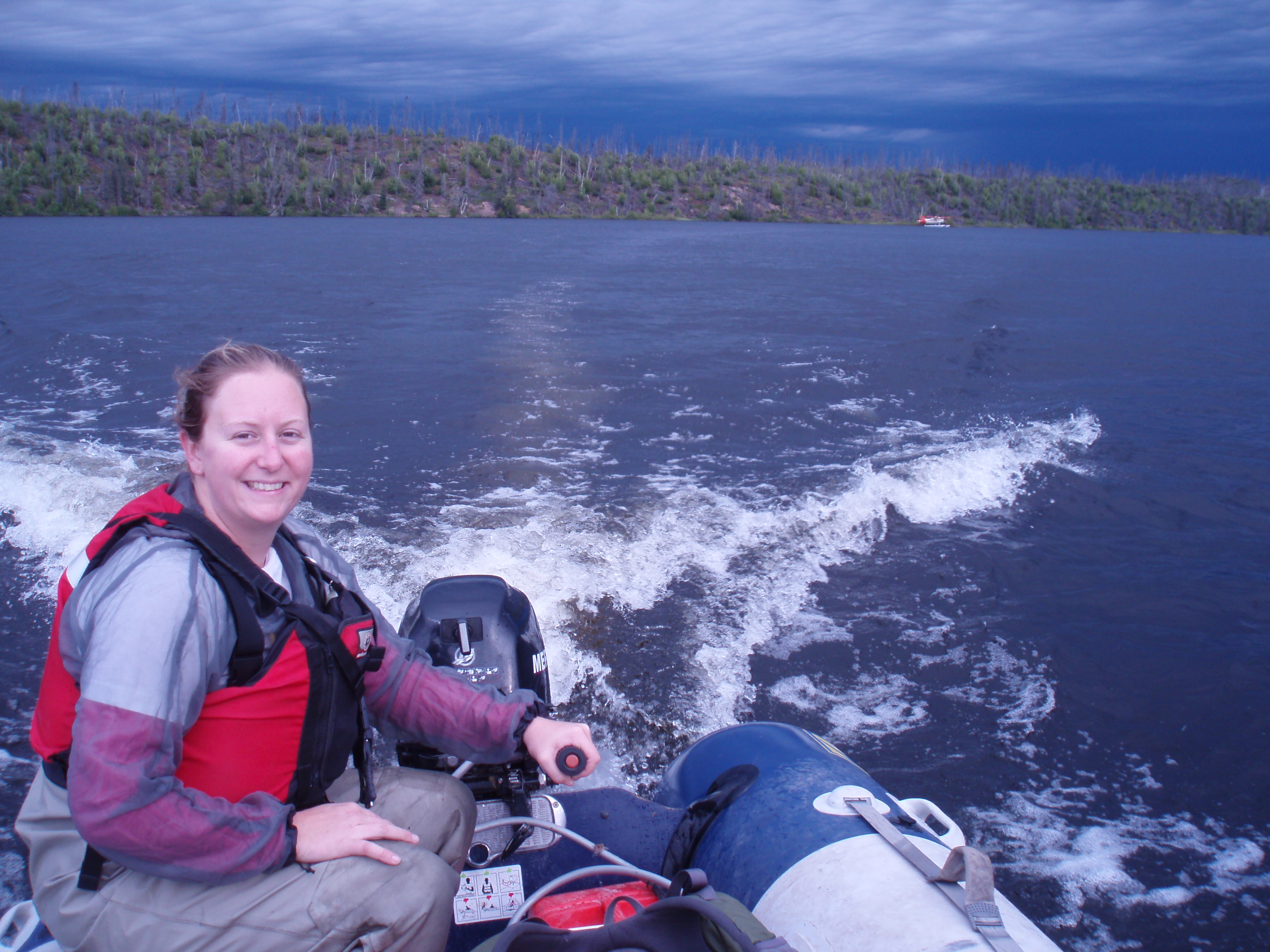 Stephanie Pow, Head of Operations (Saskatchewan) for the Water Survey of Canada, navigated from an entry-level role to leadership within Canada's NHS.

Recognizing the need to work towards gender parity for field technicians, Canada’s National Hydrological Service (NHS) launched its own Women in Water initiative in 2019. The initiative was catalyzed by conversations had during one of the early Women+Water Lectures on Knowledge Mobilization (listen here) where Dr. Alain Pietroniro, then Executive Director of NHS, inquired about how gender equity could be met in the workplace. Although the NHS had achieved gender balance with the professional staff (engineers and scientists), women only accounted for 15% of the technical staff and Dr. Pietroniro knew that improving gender equity had to be a priority.

Interested in becoming a hydrometric technician for Water Survey of Canada? Learn more about their Women in Water hiring initiative.

The conversations that followed fundamentally shaped the new NHS Women in Water initiative. In consultation with Dr. Schuster-Wallace, Dr. Pietroniro and Amber Brown (Supervisor for the Water Survey of Canada in Alberta) discussed the potential hiring and systematic barriers that impact women in NHS, and ultimately shaped the strategy and setting the goal of having more than 30% women in the organization by 2030. Through these discussions, it was realized that recruiting more women through a targeted staffing process – a women-only competition held at the hydrometric technical level - was the best approach.

In just two years, the NHS Women in Water initiative has made substantial progress in recruiting and supporting women within the organization (see the table below). By 2021, 21% of NHS technologists in Canada were held by women employees, and women supervisors increased from 19% to 25% - the highest it has ever been. With the increase in women in leadership roles within the organization, it is likely to translate into a positive impact on the future recruitment of women in NHS. 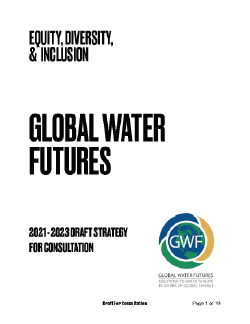 Through the Women+Water Lecture Series, GWF continues to support women in water. The series has brought the importance of equity, diversity, and inclusion (EDI) to the forefront of GWF and inspired GWF to recently hire an EDI specialist, Dr. Andrea Rowe. With the guidance of Dr. Rowe and the support of outreach coordinator Stacey Dumanski, Women+Water continues to grow as an inclusive community and place where students, faculty, staff, and practitioners from around the world can discuss their water research experiences and share their expertise. Women+Water also represents the cutting edge of accessibility in GWF events. Specifically, 2021 represented the inclusion of simultaneous French interpretation and real-time closed captioning in English. French closed captioning is included in post-production.

As the Women+Water Lecture Series continues to make waves around the world and open up dialogue about all things women and water, it is hard to say how far those ripples will travel.

The Women+Water organizers, with the support of their Advisory Committee, look forward to growing the series, both in topics covered and the community created, in 2022 and beyond. Stay tuned this fall for details of our 2022 schedule!

Recordings of previous lectures are available to watch on the Women+Water website.

If you would like to get involved with the series as a speaker or mentor, please contact GWF EDI Specialist Andrea Rowe.

Do you have any questions, comments, or would like to contribute a GWF Science Feature? Contact the GWF Outreach Coordinator.